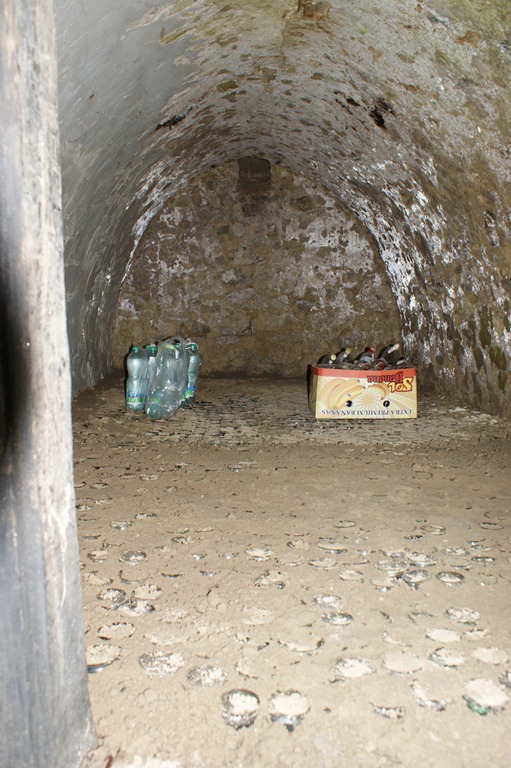 It’s about the only Chubby Brown joke I can remember that doesn’t have an ‘F’ word in it, and for whatever reason its a joke that always runs round in my head when it snows, as it is doing right now.

You may have noticed that my pledge to head over to the house to try and get some work done was curtailed by the weather; dropping temperatures and snow on a daily basis for the last three days has kept me in my hidey hole, which has given me too much time to think and I began to get all morbid about the state of the world, which is against my optimistic nature.

So the best remedy to this sudden cloud was to look at some old photos and remind myself of the work that Gosia and I put in over the summer and how much closer we are to achieving our dream. One of the little projects that I think warrants a mention is the pivnica.

A Pivnica is probably best translated as a cellar or even basement, depending on which side of the Atlantic you are on; or in this particular case a root-cellar; because it is essentially outside and underground. What would this be called in England? 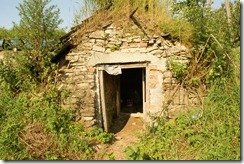 First things first I had to tackle was the roof, stripping back the earth and tree saplings to reveal a mixture of old terracotta tiles, asbestos and tin sheet, old polythene fertiliser sacks and the occasional old coat, which served as the roof. Once removed we were left with the rotting remains of a wooden roofing frame, and under this the earth that was piled over the top of the stone built domed structure.

Once stripped bare we had to tread carefully as the earth was starting to fall in on the inside on the pivnica and it was soon decided to leave the earth in place and create a wooden frame to support a new tin roof. Luckily for us we had retrieved quite a bit of wood from the barn renovation  and whilst it may not have had the structural integrity of fresh timber it was fine for this task.

Controversially I keep all our old engine oil and mix it with diesel to create our own creosote for treating of wood; I know some people think this might not be environmentally friendly, but in my opinion it’s a far better use than taking it to the dump and not knowing what happens to it once you wave goodbye; it hasn’t any real value so my suspicion is that it would be tipped into landfill or burned off, so treating the wood in this type of construction seems like a sensible thing to do. Thinking back to the initial cost of treating the barn with a commercial product I know what I will be using next time it needs a fresh coat. 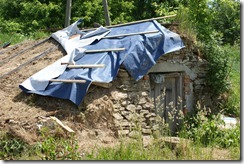 So frame in place, followed by a waterproof membrane of a low cost roofing felt we dug deep in our pockets and purchased new tin sheet to top it all off. Tin roofs are surprisingly common in Poland, in fact its the most common roofing material used, so we where able to pick up a basic pattern for a reasonable price and from what I have read it has a low embodied energy compared to some of the modern alternatives so I’m offsetting any harm of the home made preservative 🙂

I’m sorry to say that on reflection we will probably remove this roof and replace it with a living roof, but don’t worry the tin will be used on my chicken shed project 🙂

So that’s the outside, what about inside? Well as this was most definitely a joint effort Gosia was busy with her rubber mallet and sacks of empty bottles creating a new glass bottle floor! Its was an idea I came across on the web when I saw a few examples of people making paths with old bottles, inverted and hammered into the ground and as a glass bottle lover it seemed like an ideal solution for putting our rubbish to good use. Having said that we soon realised that my beer consumption would never provide enough material, so we employed the help of friends, neighbours and a local bar to provide us with the three thousand plus bottles required to complete the entire floor. We also inherited quite a few screw top bottles with lids, so they were preserved for future home brew projects:) 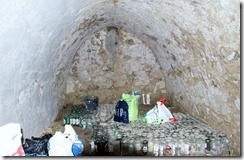 Hats off the Gosia who completed the entire floor on her own, about the only thing I added was encouragement or criticism, but once finished I had the back breaking job of lime rendering the internal arched walls, so revenge was sweet for anything that I may have said out of turn.

And there you have it, an underground root cellar which should keep things cool in the summer and prevent freezing in the winter, I can vouch that nothing went above 12°c in the summer, but until I set up a reliable thermometer for the winter I’m not sure about protection against freezing, but my guess is that it will be good.

When people first see it they worry that the bottles will break, but belive me you could jump up and down on them, it’s solid and by all accounts provides very good insulation.

It looks like I never took any photos of the end result, but you get the idea of how it came along; as soon as I battle through the snow and cold I will add a few more photos of the finished product…or I will find the photos I’m sure I already took 🙂