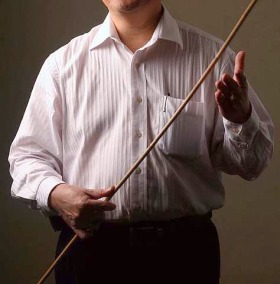 Which, as it turns out, works in my favour; not being able to speak Polish is one of the reasons why I landed a job teaching English. Although I have to say that the word teaching should be used loosely in this context.

With no experience what so ever in teaching, a mediocre grade C GCSE from 1984, an umbilical cord reliance on my spellchecker and a prevailing Yorkshire accent; it took me by surprise when I got the job.

Of course I put it down to my amiable personality and winning smile, or it could be that the company who requested an English native speaker asked for someone without any experience; either way I got the job and every Tuesday I head off to Mielec (about 15km away) to the offices of the local electricity company to chat with key members of staff, in English.

The morning is broken down into three lessons (90 minutes each), the first two are one to one classes with the president of the company and then the financial director. The third and final lesson is with a small group who’s numbers fluctuates between two and six people, depending on how busy they are. This final group works within the accounting and technical departments of the company and their English is at a slightly higher level, which can make for some interesting conversation.

We are provided with course books printed by the Oxford University Press; although I doubt very much if there is any link to this well know English scholarly institute, and if there is then I have to say that I’m disappointed with the many Americanisms and spellings that are used throughout; the use of the letter Z instead of S is particularly annoying; although I admit it might be handy if playing scrabble!

Whilst I began using the books to structure the lessons I often found the guidelines on use quite muddled and difficult to understand, so as time has gone on the books are now only used to provide us with a topic of conversation. That is if we haven’t already settled down to discussing other things, such as the latest skiing trip, a visit to Krakow or the fate of Manchester United over the weekend. Incidentally I support Barnsley as the nearest geographical league football team to my place of birth, it also means that I have no interest in football!

And that’s it, I babble along asking questions for four and a half hours (getting paid for six), listening to conversation and correcting any errors that become apparent. I have to say that most mistakes relate to the tense used, plurals and pronouns (I had to look the last one up on Google). Everybody is friendly, professional and, with the group especially, we are able to have a good laugh; a perfect job by all accounts.

Of course I speak too fast and my Yorkshire accent, although dulled by spending many years down south, can be quite a contrast from what they are used to; but I think this all helps for preparing them for a real world situation:)

It’s also quite well paid in comparison to the average wage and I earn in a day what some people work all week for, which doesn’t seem right somehow ; but it is what it is. Hopefully in the future a similar job closer to our new home will be available and will help to supplement our income once we start farming the land and taking in guests. I’d certainly much prefer that than seeing Gosia heading off to Holland again 🙂