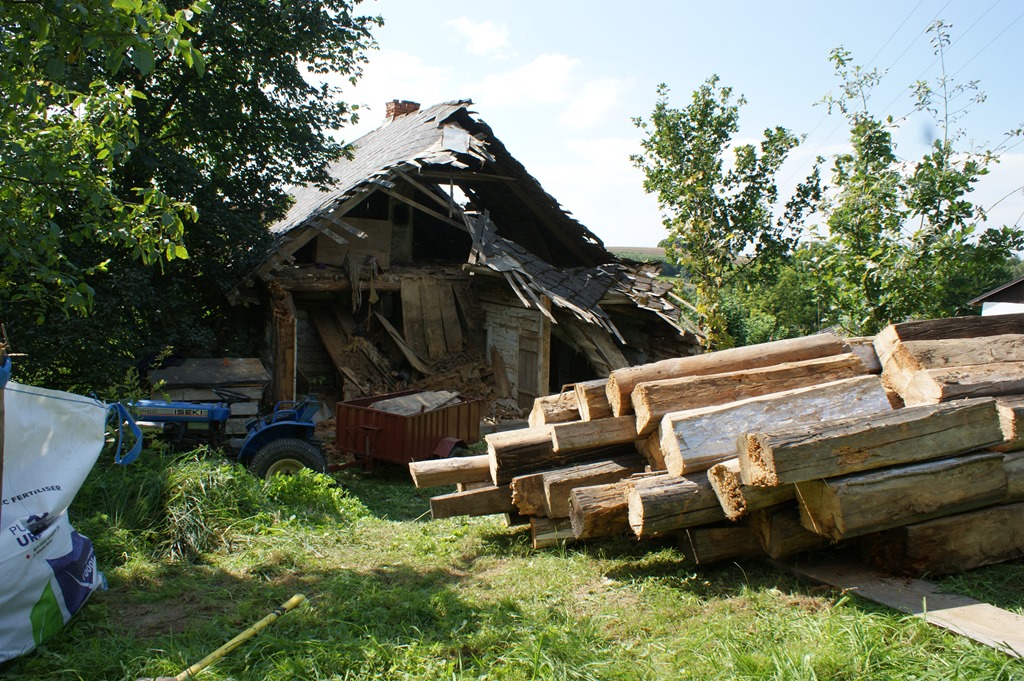 No, nothing to do with the 80’s classic from the Talking Heads, nor the last desperate act of a father on the brink, it’s just that it’s rather cold and we ran out of wood!

But before you worry too much its not the house we are living in that we are torching, despite what you might think about a house of straw they don’t burn that well, rather it’s the old derelict house down by the barn.

Eighty or ninety years old, maybe more, it holds many memories for some of the local people. Only this Boxing day we met an elderly lady who remembers visiting the house as a young girl, visiting your neighbours was all the rage back then. The house itself was considered big for its time and its design is one that typifies the Polish countryside for me, with many examples still sanding, nestled between the modern freshly built houses of the last 20 years. If you ever visit Poland I would suggest a visit to one of the many open air museums, http://openairmuseum.pl/ they offer a unique glimpse of Poland’s past architecture and way of life.

Still we made a deal with my father in-law in the autumn, that if he demolished the house he could have half of the wood for his own winter fuel supply. No sooner was the deal struck then the family and quite a few friends descended, although it has to be said the bulk of the work was carried out by mother and father in-law.  We were left with heavy beams, cut to the length of the van for transport back to the family home, piled neatly under tarpaulins and whilst most made the journey quite a bit was set aside for us.

In the end half of the house was left standing, the weather turned against us and it made sense to keep the shelter in place as there is still a couple of tonnes of clay in there! Which is handy as I want to build a straw bale cottage there in the years to come.

So here I am, cutting with chainsaw and chopping with axe, almost a hundred years of history to warm a new generation. Marvelling at the giant hand carved dove tail joints that held the old house together, it seems a shame to burn it somehow.

But burn it does and it burns wells, too well in fact as the old dry timbers are a honeycomb of wood worm burrows and rot that has set in over the years. I just hope that it lasts us the rest of the winter as I’m not sure what to burn next…um maybe this bit of old furniture in the basement!

10 thoughts on “Burning down the house”