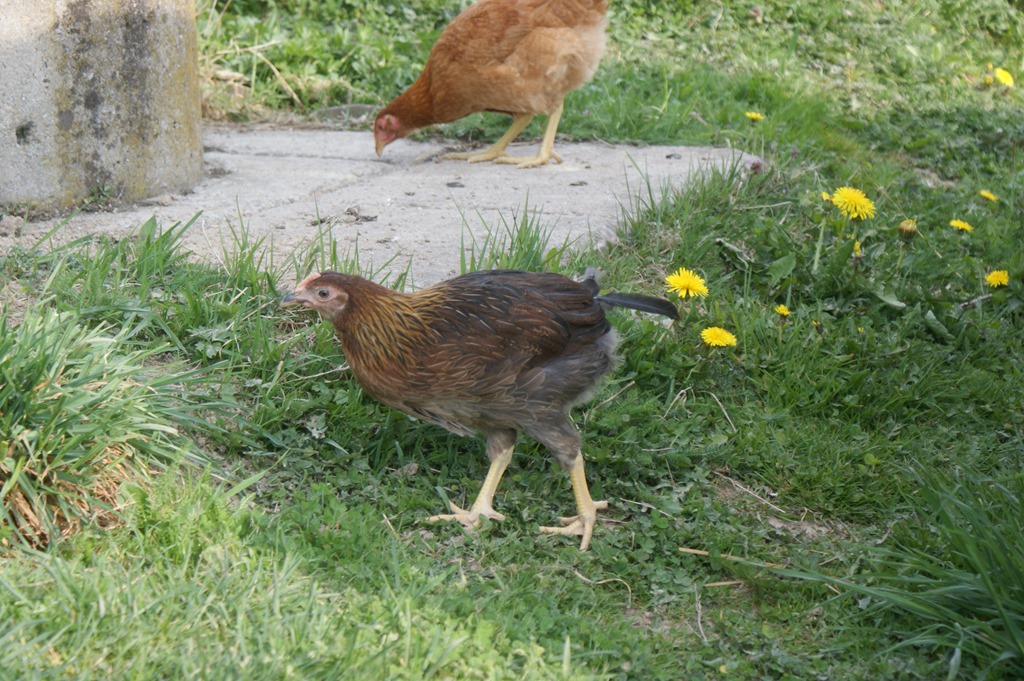 The chickens seem to be settling in well now, it’s over a month since we got them and laying patterns are becoming more predictable and miss formed eggs, caused by stress, seem to be a thing of the past. We have also given them free range of the land and the enclosure I built to protect against foxes has little purpose. We were rewarded with 103 eggs for the first thirty days of board and lodging provided. In addition Kazek, our neighbour in the valley, added a mothering hen with three chicks to bring our guest list up to twenty-three, although this dropped to twenty-two as one of the chicks didn’t make it through the first night. Still this wasn’t enough to satisfy our egg appetite and we had to ship in an extra thirty-five eggs from my mother-in-law to fill a gap when production was at a low ebb. No surprise then that we are now sitting on a surplus of seventeen eggs as production has levelled off at five or six a day.

If you look out of the window most days at around five o’clock you will see a tumble of fur as Zara and Dennis play fight with Barbara, a neighbours dog, who is enjoying his freedom from the chain that holds him for most of his day. Forgive the names but as our Dennis is a bitch it seemed only right the neighbours dog to be given a feminine name, so he was christened Barbara.

Bite, snarl, jump, chase and run, all the time looking for an exposed leg, or tail, or neck, or.. Great fun to watch and despite our dogs enjoying total freedom of the surrounding land,  and joining me on two walks a day, they seem to have endless energy available to them. The fun often goes on for an hour or so before Barbara hightails it back home, Zara and Dennis often in pursuit, not returning until later in the evening. We consider the money spent on vets bills well spent as chastity is not strong in the canine world!

By now you can probably guess where I’m going with this story and at around five o’clock on Monday afternoon (last week), whilst enjoying some homemade pasta with our dwindling supply of tomato sauce from last year, the phone rang.

Kazek had heard a commotion from our chickens and had spotted one in a tree! No sooner had the translation reached me then I was hot footing it down the track to the stable, Jackie sprinting ahead sensing that a chase was on. I’m not sure what the record is for a 300 meter sprint in poor mans Crocs (£3 at Lidl)  is, but I must have been close; just in time to see the back end of Barbara scampering away with Jackie in hot pursuit.

An Indian head dress, a pillow, what do you do with that many feathers? One of the girls must be dead? Well not the mothering hen, she’s perched at the top of a tree, looking down at the electricity pole below her, how the hell! Skirting around the area and beating the drum of the feed bucket chickens start to appear, I count to 21. If we only lost one then we were lucky I tell myself as I coral them into the safety of the fenced area.

It was a slow journey to let the chickens out the next morning, sad that we could no longer let them roam free and that we had lost one in learning our lesson. Then, as I neared the old stable I noticed a lone hen, nestled in a pile of dead grass that we had raked up the day before whilst clearing land. No losses after all, although inspecting the chickens more closely I worked out where most of the feathers had come from!

12 thoughts on “103 not out, despite a strong challenge by Barbara”