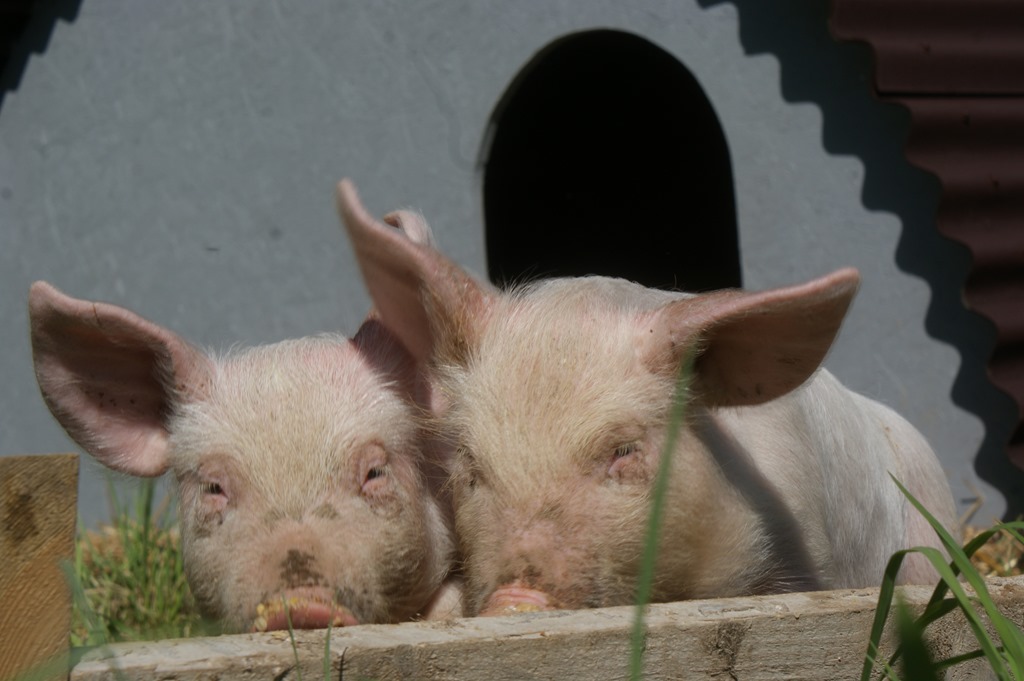 But we do care for animals, so when we arrived at the farm to view the świnia złotnicka that we had found via an advert on tablica.pl we were a little shocked at the conditions that the animals were kept in.

I guess we were a little naive to expect anything else, but after talking to the farmer a couple of times on the phone to check various details we had expected something a little different.

The search for a traditional Polish breed had taken a while and we had expected to have to travel over 200Km to find some that fit the standard, but then eagle eyed Gosia spotted a photo of the desired spotted pigs on the website and we made the call to discuss purchase. We were assured that they were in fact świnia złotnicka and that they were kept on grass. This turned out to mean that the sow was a świnia złotnicka and that they cut grass and included it in their diet fed in a wheel barrow. Buyer beware!

Still we were here and the thought of a 400Km round trip didn’t appeal, plus we had the opportunity to liberate a couple of piglets and so grabbing them by the hind legs I popped a couple into the back of the van.

That was three weeks ago, time which has not been without incident. Initially you think that the electric fence that you put together is sufficient to hold the timid little souls, well it is until they get a bit of confidence and realise that the shock is only a temporary thing and if you are moving fast enough you hardly even notice it! Still no harm done and there is the outer perimeter fence that I put up for the goats to keep them in, the electric fence was simply there to divide the paddock. Um well lets just say that the standing joke now is that I have spent two days putting in fencing that it has taken two days for the pigs to work out away around, or should that be through! Thankfully they respond to my voice and the promise of food, so despite having free range pigs as well as hens I can get them all back in there respective areas with a shout and a rattle of a bucket, the latter more effective.

I know the standard advice is not to name anything you intend on eating,  and my bucket call remains ‘c’mon pigs’, but as our lunchtime viewing is often Postman Pat, Masha and the Bear or Peppa Pig it was inevitable that we had to bring Pinky and Perky up to date, and so Peppa and George it is.

Peppa took a turn for the worse on Wednesday, fading fast into Thursday with a high temperature, no interest in food and buried in the straw of the arc (ark?). Friday morning and she was still no better and all the reading I had done indicated something that would end in death unless caught in time and treated with antibiotics, so we called the vet.

Arriving an hour and a half later he immediately administered three injections and then by our request. although against our organic principles, a worming shot. He even left a shot for George as we couldn’t catch him at the time. 70 Pln, yes that’s about £12.50 or just shy of $18 for a call out and injections. A very small price to pay in the hope that she might pull through. His diagnosis was as vague as mine and he left saying that the next 24 hours would settle her fate.

Two hours later and she was running around like a mad thing, eating drinking, ploughing the field, smiles all round. I guessed one of the shots must have been steroids as later that evening she was back in the same state, although the panting had eased. Expecting the worse the next day we found them both happy in with the chickens (two fences away) and so again our hopes were raised that all was well, but then as the day wore on the same thing. Which brings us to today, and as we set off to serve breakfast to our long and short term guests we discussed the possibility of finding a dead porker.

I headed to the barn to get the various mixes ready for the guests with special dietary needs as I heard Gosia exclaim something that I won’t even type in Polish.

Needless to say that she had opened the back door of the stable to let the chickens out into the run only to discover that someone had come in with a rotavator over night, or should I say two happy brown snouted pigs greeted her with grunts of glee 🙂 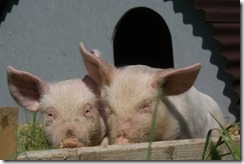 Talking of vegetarians, I stumbled upon Rabbit Food the other day whilst searching for goats! I think Corrie Louise may well fill the food blog gap that Food and Forage Hebrides left, well worth a look.

Trying to leave the rat race and live a less hectic and harmful life. From the building of a straw bale house to the composting toilet diaries; read my blog https://winkos.wordpress.com/ View all posts by Eddy Winko

9 thoughts on “We are not vegetarians”