It has been a funny start to the season, late March, early April showed so much promise with temperatures reaching the mid twenties (77f). The noise of traction could be heard all around as farmers rushed to get seed in the ground. We were no exception and with a new array of tractor tools fashioned from old horse drawn equipment I set too and managed to prepare the ground for a dusting of oats by the 5th of April. A good early start to the years crops. 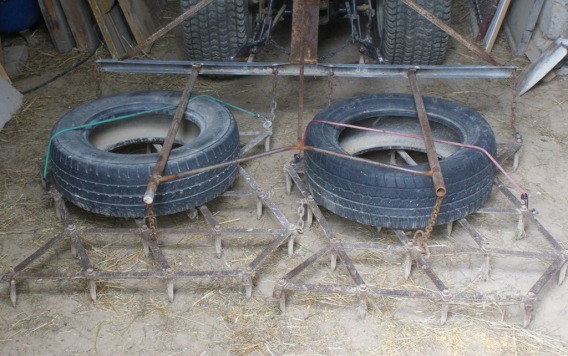 Our neighbour and friend Kazek started us off with a harrow.

My favourite, the cultivator.

Not that the weather was that bad, more wet than cold, but this postponed the planting of barley, for a beer making project, until the 20th. The potatoes went in the next day on the 21st and then a mad flurry of activity for the next two days saw the other main crops going in, carrots, peas, onions, etc. and just in time as the heavens have opened again and the threat of frost is hanging over us. I hope the blooming and budding fruit trees will be ok.

The windowsills are jammed with seed pots ready for the better weather after the last frost in the middle of May, and the mother in-law is bringing on a fine selection of tomatoes and cabbages in her greenhouse. I also planted the first hundred pumpkin seeds with probably the same again today once we have found enough pots (any container will do that I can drill holes in the bottom of)

Mind you the poor weather has some advantages as we have made progress in the house. With only one room to complete and some minor work in the kitchen we should be almost set, inside at least. The outside still needs work, a barrier for the terrace been the priority once we decide on the design and the the weather improves.

We have even had guests, first from Ireland and then from Jersey, thankfully they were friends and they didn’t mind the lingering paint pots or cordless tools scattered about the place, well at least they said they didn’t mind 🙂

Now for the final push to make sure we can pack a few paying customers in for the summer, please contact us if you are interested in a quiet holiday in rural Poland, I’m sure we can do a deal if you don’t mind feeding the goats!