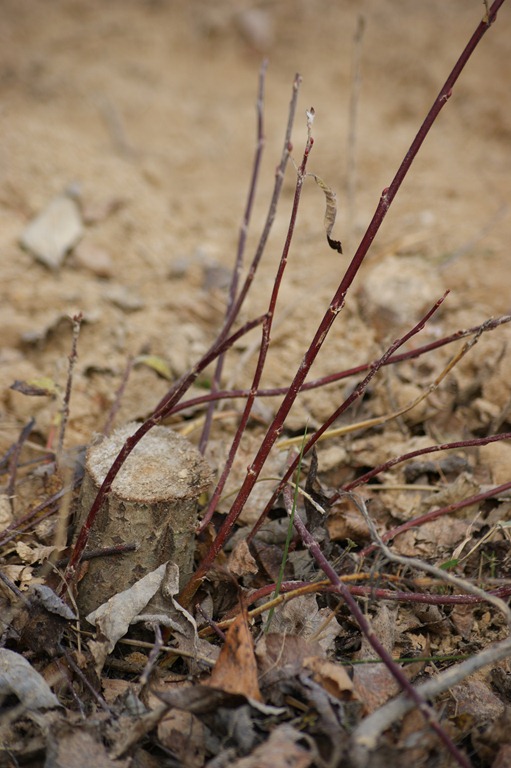 One of our hopes for the future is to be self-sufficient in wood as a fuel for our heating and some of our cooking, I would say all of our cooking but I don’t think it will be practical or realistic  to cook on the wood burning piec in the height of summer; 35ºC is not uncommon in July, August and September and the extra heat might just push us over the edge!

So back in  the spring of 2011 we purchased our first necessity (toy for me) for our future smallholding, a chainsaw; believe me Gosia is hard to convince when it comes to spending money so I had to have a solid argument ready before the go ahead was granted, but it was an easy sell with the above argument for self sufficiency laid of the table. Oddly enough once the novelty wore off and the initial felling of some of the larger diseased fruit trees was done I went back to using a bow saw, or even a pruning saw to thin out the woodland that we have; the chainsaw only comes out when really necessary.

As an experiment I decided to cut a section of trees down, not the really young trees, but ones I guessed to be five or six years old; about 3-4 inches (7-10 cm) in diameter., to see if they would send out shoots. The majority were silver birch, which I had read would coppice if they were under ten years old or hadn’t started to send out seed; there were also a few willow the odd oak and a few unknowns; and then I forgot all about them. So when I noticed new growth on the tree stumps that remained after I cleared a path for the new electricity cable trench, I was reminded that I must check on the previous years experiment.

As you will see by the pictures we have had a degree of success with this birch and neighbouring willow; in fact as I inspected the area that I cut it would seem that about 30 % of the birch has coppiced well and sent out multiple shoots all of which are almost 6 feet high (close to 2 meters) All of the willow seems to have done what it is renowned for and exceed the growth of the birch by a foot or more, even the oaks have sent out shoots, although as would be expected the growth is a lot slower at about 2 feet (60cm). A great success?

New shoots from the September felling

Thinking that this was proof that we could have a sustainable source of wood in the future I thought I better turn to the internet for more advice of coppice management and from what I have read so far it may well be a false economy to coppice as the space requirements for a coppice to perform well may well be better allocated to many individual trees! I will of course continue to read  and may well report back once I’m convinced either way. Any advice happily received 🙂